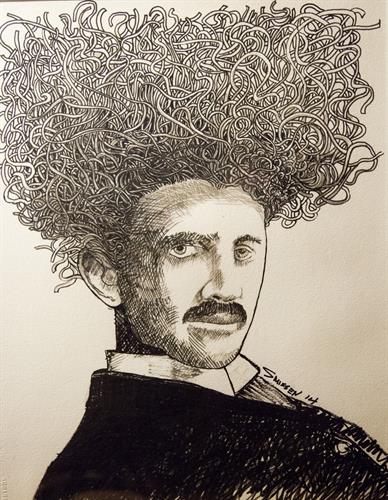 Tesla, Pen and ink on archival board
Event Description:

The artist’s social and political role is akin to the Medieval jester, who between two jokes would tell the king four truths. – Julio Cortázar

Partners Gallery is showing the work of the late legendary Mendocino Coast artist Eduardo Smissen, February 9 through March 6. Eduardo described his paintings as…“my reflections of divine chuckles or the frustrated stutter. Mystery has always been a source for my work, from the long shadows of film noir to the burning giraffes of surrealism.”

Smissen spent a year in Spain absorbing Salvador Dali’s Catalan coast influences. His images can startle, like a painting of a flaming suitcase falling into the ocean (Lost Luggage) or a large painting of very large flies (Fly Dynasty). Described as a fabulist, he fits the definition of an imagination unfettered by the laws of logic. His friend Stephan Kessler referred to Eduardo as “…an enthusiast and a joker whose conversational tone always had a slightly mischievous and ironic edge.” He utilized gunpowder in his work as well as discarded objects and flea market finds, giving them new meaning. “I use my life, my vision on areas I feel should be looked at, and pose questions I feel should be considered. My working method is fairly simple: Gathering, Arranging and Execution.”

Gallery hours are Thursday through Monday 11 to 4:30.